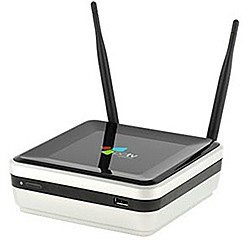 Yep, just like the title says, hauppauge has announced the Broadway, a new “set-top” aimed at iPhone, iPad and iPod touch users. The hardware streams live OTA HDTV to an Apple handheld after first compressing the video using H.264. The resulting media can be delivered locally over Wi-Fi, or to a remote place using any Internet connection. Over-The-Air ATSC signals can be captured using a built-in ATSC tuner, while cable is supported through clear QAM. Pricing is a bit steep at $199 and the box is scheduled for February release.