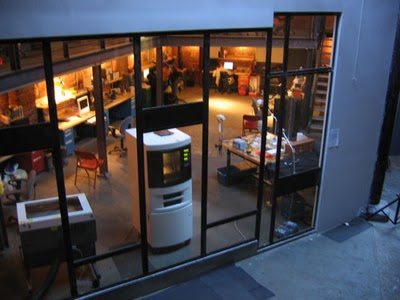 Stumbled across this earlier today and did not get a chance to make a note of it. From the overview portion of the page:

“The Eyebeam OpenLab is a home for artists, engineers and hackers pioneering open source creativity. The first initiative of its kind, the lab is focused entirely on incubating experimental technologies and media that directly enrich the public domain.”

Sounds like my kinda place. Now you might be asking why it’s mentioned here…..well it’s N.E.R.D. content and since I’m working with a group of people at my Uni on a very similar Lab, atleast in concept, I thought it deserved a mention.

Their Facilities section describes the environment as:

“The OpenLab at Eyebeam includes a mezzanine with an extended whiteboard and projector for informal meetings; a Lab space for electronics production, software and hardware hacking and rapid prototyping with technologies such as a laser cutter and 3D printer; the Prototyping Gallery, a semi-public space adjacent to the lab allowing for ad-hoc installations and project demos where the public can view the latest developments and artists and engineers can receive feedback on prototypes; and raw studio space where artists in residence create projects and access all of the opportunities and expertise within the OpenLab, Production and Education Studios.”

Sounds like a very cool place to Hack/Create/Invent. BTW, some of their earlier projects include — for those who remember — Wifi Liberator and Laser Tag/Mobile Broadcast Unit.