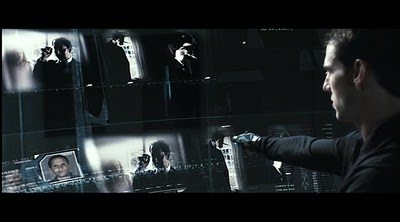 Well it had to happen sooner or later. YDreams and Canesta Inc. have announced a partnership that will redefine Augmented Reality. We’ve all seen AR demos where “Real” markers are recognized by machine vision engines and are replaced with “Artificial” objects in the video stream. Canesta has taken the next step and built a camera that can provide a realtime markerless depth map of the scene it’s shooting. 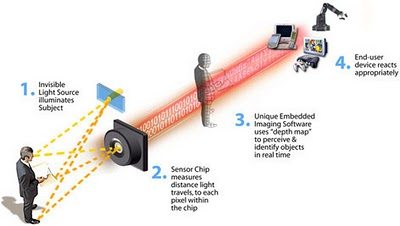 Canestavision sensor chips fundamentally, work in a manner similar to radar, where the distance to remote objects is calculated by measuring the time it takes an electronic burst of radio waves to make the round trip from a transmitting antenna to a reflective object (like a metal airplane) and back. In the case of these chips, however, a burst of unobtrusive light is transmitted instead.

The chips, which are not fooled by ambient light, either then time the duration it takes the pulse to reflect back to each pixel, using high speed, on-chip timers in one method, or simply count the number of returning photons, an indirect measure of the distance, in another.

In either case, the result is an array of “distances” that provides a mathematically accurate, dynamic “relief” map of the surfaces being imaged. The image and distance information is then handed off to an on-chip processor running Canesta’s proprietary imaging software that further refines the 3-D representation before sending it off chip to the OEM application.

YDreams has taken Canesta’s technology and applied it to AR.

Until now Augmented Reality has delivered limited applications to the general public, mostly offering 3-D objects on top of visually obtrusive markers. By using Canesta’s 3-D vision sensors, YDreams applications can do real-time capture of any object in 3-D, without the aid of any special markers or enhancements.

One response to “Markerless Augmented Reality aka. Minority Report Interface….”