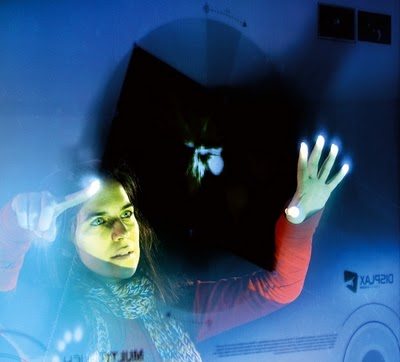 A new large-format multi-touch technology launched today by DISPLAX, a developer of interactive technologies, will transform any non-conductive flat or curved surface into a multitouch screen. The DISPLAX Multitouch Technology, believed to be the first of its kind, has been developed based on a transparent thinner-than-paper polymer film. When applied to glass, plastic or wood, the surface becomes interactive.

It can be applied to flat or curved, opaque as well as transparent surfaces up to three metres across the diagonal. It is hyper sensitive, allowing users to interact with an enabled surface not just by touching it but, for the first time, by blowing on it, opening up new possibilities for future applications. Currently, the technology can detect up to 16 fingers on a 50-inch screen. The number of fingers detected is expected to increase as development progresses.

Based on patent-pending projected capacitive technology, DISPLAX Multitouch Technology uses a controller that works by processing multiple input signals it receives from a grid of nanowires embedded in the film attached to the enabled surface. Each time a finger is placed on the screen or a user blows on the surface, a small electrical disturbance is caused. The micro-processor controller analyses this data and decodes the location of each input on that grid to track the finger and air-flow movements. The DISPLAX Multitouch technology controller combined with a projected capacitive nanowired film is a lightweight and highly scalable solution, ranging from seven inches (18 centimetres) to three metres across the diagonal thus opening up a wide range of commercial applications suitable for indoor or outdoor displays.

The DISPLAX Multitouch Technology will begin shipping in July 2010. The prices will be very competitive and depend on size.