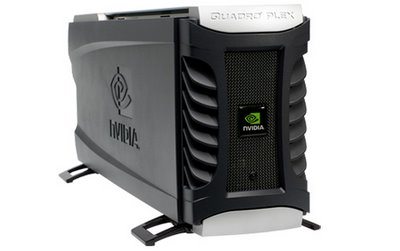 I’m gonna date myself here and ask….Does anyone remember the Agnus Chip? How about the Fatter Agnus or the Alice? For those of you who don’t know these were the original and upgraded OCS/ECS chips that did most of the amazing (for the time) graphics for the Amiga computer back in the late-80’s/early-90’s. Fast forward to today and the announcement of the “Fatter Quadra Plex” at Siggraph 2008. The new desktop graphics monsters come in two flavours. From the announcement:

The new Quadro Plex 2200 D2 VCS houses two Quadro FX 5800 GPUs, providing 480 NVIDIA CUDA Parallel Computing Processor cores and 8GB of graphics memory. The thermal and power management capabilities of the chassis offer up to 20% performance improvement over standard add-in graphics, making it the most powerful visual computing system available. The Quadro Plex 2200 D2 VCS houses up to four Quadro FX 4700 GPUs, powering up to four displays via its dual-link DVI outputs, and up to eight displays with its high-resolution projection capabilities.