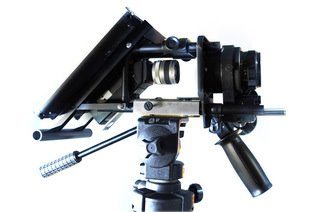 Yep, those crazy open source hackers over at dvinfo.net have done it again. You thought the RED camera brought about a revolution in dcinema, well, you ain’t seen nothing yet. Apertus is using the Elphel 353, free software and open hardware camera. The Elphel Camera which this entire project is based on is basically an excellent security camera that can do some real magic. The camera uses an Aptina CMOS bayer-pattern sensor with an optical format of 1/2.5″ (5.70mm x 4.28mm) and a native resolution of 2592×1944 (5 Megapixels). It features a 12 bit ADC and supports: region of interest, on-chip binning and decimation. Aptina claims that the chip has 70db of dynamic range at full resolution and 76db when using 2×2 binning. The camera has a standard C-mount but ships with an adapter ring that allows to mount CS-lenses as well.

The lower the resolution the higher the maximal possible framerate. At the full sensor size (5 million pixels or 5 Megapixels) the maximal frame rate is 10 fps in normal color mode and 15 fps in JP4 RAW mode. JP4 achieves higher framerates in general as some camera internal calculations are skipped and need to be applied later in postproduction (like debayering/demosaicing).

The following connectors are available on the camera body:

And if that’s not enough for you there is a extra bonus that comes from the ability of the camera to shoot Full HD in portrait (upright) mode. Upright screens are basically 1080p screens mounted sideways (portrait mode). This type of mounting is becoming increasingly more popular for events, exhibitions and advertising. If you want to spare yourself the hassle of building a right to mount the camera 90 degrees rotated you can whip out your Apertus rig and just start recording. This will give you a 1088×1020 image that’s ready for portrait playback.