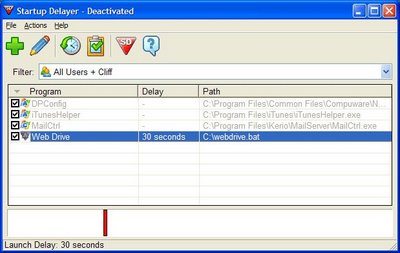 Yep, as weird as that sounds, by cascading your startup items load time (ie: most of the stuff that gets loaded into your system tray) you can actually speed up windows boot times. When Windows loads it’s Startup file, it attempts to load every program in there at the same time. Therefore if you have quite a lot of programs starting when Windows starts, each program will try and grab CPU time so that it can load and that makes windows Craaawwwwllllll.

Startup Delayer allows you to setup how many seconds after Windows has started, to load each program. This little freebee — for example — allows you to load that really really important (yeahright) “iTunesHelper.exe” program later in the boot process. Let’s face it half the crap that gets loaded during windows boot process are not actually needed right when the user logs in. So delay that IMAP/POP Email checker, push itunes/quicktime/adobe air/adobe pdf and all the other junk to a later load time and watch windows rock!!! Finally.